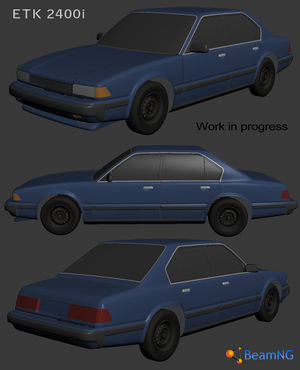 The early body shell of the ETK 2400i

“A 1980s German sedan, available with all-wheel drive. It features precise handling like any proper German car, as well as absurdly large US-spec bumpers and funky bits of trim and stripping everywhere. It’s as comfortable carving up winding back roads as it is taking a beating in a demo derby.”

So far, all I Series models have Inline-6 engines, with the model number of each vehicle (3000 for example) related to the displacement of the engine the model contains (3.0L or 3000cc).

The 2400ix boasts far more obvious changes from its lower-level sibling, including all-wheel-drive, nicer wheels, black trim around the windows, and a new cream and black interior, while retaining all the improvements of the 2400i. It is also seemingly slower than the 2400i due to the increased weight of the AWD system. Both variants of this vehicle have anti-lock brakes and alternate trunk logo. 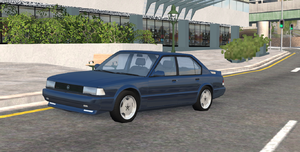