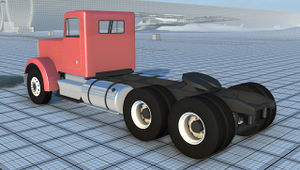 This is the most bare-bones truck that you can get from the factory, has a T300 turbo that cranks out 309 BHP and 1466 NM of torque, only a passenger side exhaust and only one fuel tank on the passenger side, and steel wheels. Strangely enough, even though the in-game description says "ready to install a upfit", the base short T65 already comes with a 5th wheel attached.

This base model has no upfit, 2 fuel tanks, a passenger side exhaust, aluminum wheels and the same engine as the other base models.

This is the T-Series that started it all. This model has a upgraded turbo called the T350 which makes 359 BHP and 1719 NM of torque, has 2 exhausts, aluminum wheels and 2 fuel tanks.

This is a mixer truck that has steel wheels, 2 exhausts, 2 fuel tanks and a two-tone livery.

This is a T65 with a massive turbo that cranks out 607 BHP and a staggering 2696 NM of torque which is probably enough to slow down earth's rotation, has a 5th wheel for very fast deliveries, custom exhausts, and of course, the ram plow. If you have a problem, this truck probably could solve it.