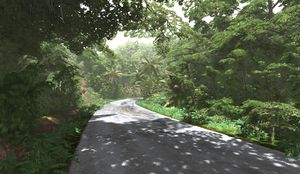 Jungle Rock Island (sometimes abbreviated as JRI), is a dense jungle Island map in BeamNG.drive. It is the successor to Dry Rock Island, which has now been deprecated.

The default starting location is at a bend in the vicinity of the volcano.