The Gavril H-Series is a lineup of full-size vans and chassis cabs manufactured by Gavril between 1995 and 2001. It was one of the five vehicles included in the first version of BeamNG.drive.

Since all models are based on the same chassis, most modifications or options available for one model, such as a 4.1L I6 engine or a 4WD transfer case, can be fitted on any other. 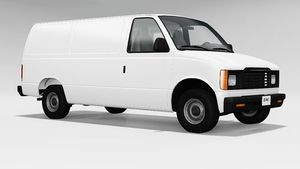 The H15 Vanster is a typical van, based on generic designs of vans from between the late 90s and the mid 2000s. The H-Series has the same powertrain options as the D-Series. It comes stock with the 4.5L V8 shared with the D-Series and Grand Marshal.

The standard model is equipped with a 4-speed automatic gearbox (although it is possible to swap the 4-speed with a 6-speed transmission), which couples the engine with the rear wheels to make a RWD drivetrain. A front transfer case can be added to convert the vehicle to 4WD if necessary. The H15 also has a 90L fuel tank, located in front of the rear axle.

The suspension setup is typical for a van, a relatively soft setup including a live rear axle suspension for the rear, and independent suspension in the front with IFS coilovers to allow for comfortable driving along uneven terrain, with a decent amount of ground clearance for driving on harsher roads. The base model H15 weighs about 2300kg.

The rear doors can be opened. Pressing Y or U toggles the left or right doors, respectively, and pressing O toggles both doors at the same time.

The Off-Road variant is essentially an H15 with upgrades equipped to make this vehicle an offroad charger. It has larger Grip-All TXR tires, lifted suspension, and custom bumpers. It is fitted with Stage 2 engine tuning, bringing the horsepower up to 475. The weight of this model also increases, totaling at over 2400 kg.

The Police Package model has the various technologies used to make official law enforcement vehicles. So far, those consist of a blue and red light bar and a police skin, although there may be more features available for it in the future. It has no special power enhancements, so it has the same specs as a regular H15, although it weighs just a bit more.

The Work Package is equipped with a roof rack, Gavril Terra-XT wheels, and a Beamcom livery.

The H25 Vanster has upgraded suspension and drivetrain for better carrying and towing capability.

The H25 Vandal is similar to the H25 Vanster, but it has 4WD, 6-Speed automatic transmission, locking differential and wheels for off-roading. 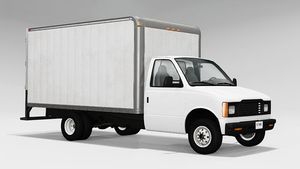 The H45 Cabster has a 0.5m longer wheelbase, heavy duty frame, heavy duty suspension, and heavy duty wheels. In addition, it can be fitted with various upfits, including a cargo box or flatbed. Powertrain is the same as the H25.

The Cargo Box Upfit has a large cargo box attached to the chassis. It was the first upfit made for this vehicle. It allows you to haul things around without them falling off your truck. Only it is very top-heavy. Don't try turning too hard, or you could flip on your side! Like the H15, the rear doors on this upfit can be opened or closed.

The Flatbed Upfit has a wooden flatbed attached to the chassis. Because of the large surface area on the top of this upfit, almost anything can be carried around on it, including most props and vehicles. However, without tie-downs to hold your load, the objects you carry can easily fall off at certain times (such as forces from suddenly turning).

The Ambulance Upfit has an ambulance box attached to the chassis. The ambulance box features a removable stretcher, working rear doors and emergency lights.