Hello, and welcome to Yet another JBeam guide!

This wiki-page is intended to cover the basics of the BeamNG.drive physics model, focusing mostly on the theory side of things. By the end of the guide, you won't be able to build a vehicle, but you will understand the theory needed to build one.

For more in depth content, head to the Vehicle Creation Megapage.

Unlike most games, which use "RigidBody" physics simulation, BeamNG is a "SoftBody" physics simulator. In short, this means that physics objects (such as cars) are deformable. This is achieved through "Node and Beam" structures. You can think of these structures as being like skeletons, or those magnetic toys that were popular in the early 2000's. 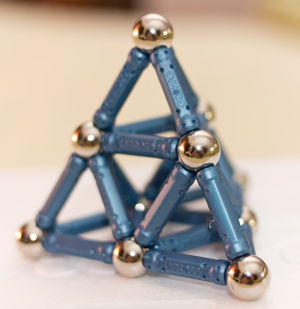 To use the above image as an example, these structures are made up of...

Nodes can be thought of as particles, each node has mass, and can move freely in space.

Beams hold nodes together in a structure. Beams have no mass, and always have a node at each end. They behave as springs (more on that later). In BeamNG, there is no angular friction holding any of these Beams at a certain angle.
In BeamNG, these beams exist purely to hold two nodes at set distances from each other. No other forces (such as twisting) are transmitted through them, and they cannot be bent. 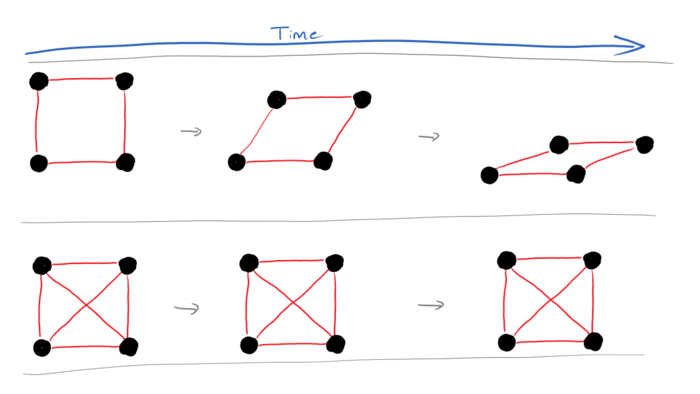 A box with no cross braces will fall over, since the beams will pivot around the nodes. By adding diagonal cross braces into the design, it becomes a solid square.

By utilising these simple Node and Beam structures, it becomes possible to model complex objects such as cars.

In BeamNG, all beams have both a "spring" and "damp" value.

The BeamSpring value defines how "stiff" a spring is.

For example, if you were to create a spring with no damping, it would be a frictionless spring. This means that in a frictionless vacuum, if you stretch one, and then let go, it will continue osculating infinitely. In this situation, the springs stiffness would be represented by how difficult it is to initially compress.

To further explain, a car spring would be very difficult to compress fully by hand, the spring out of a clicking pen would be far easier to compress. This is because the car spring is much stiffer than the spring found in the pen.

A Pigeon landing on both a soft and a stiff spring

Damping is the resistance to movement.

So a spring with a damping value above 0, when in a frictionless vacuum, will always trend towards to a stationary position. This allows the motion of a spring to be controlled.

Left: No Damping | Right: Some Damping

Typical values for Spring and Damp

Beam deform sets the amount of force required before a beam permanently deforms. Once deformed, the beam will no longer return back to its original shape. This is central to creating vehicles that deform accurately.

Beam strength sets the amount of force required to break a beam. A broken beam acts as if it has been snapped in half, this means it no longer connects two nodes together. This is useful for allowing components to fall off a vehicle. For example, a bumper can be made to fall off a car, by making the beams connecting it to the chassis break easily.

As shown in the following image, breaking beams will also result in the visible mesh being destroyed too!

Node weight can be used to adjust how heavy each individual point of vehicle is.

However, if the overall stiffness of all connected beams are too high, it will begin to vibrate, and may even explode. To prevent this vibration, you either need to make the node heavier, or the beams less stiff. To make things even more complicated: Beams will also start to vibrate and explode if your beamDamp is too high.

This image shows the effect of node weight on a vehicle, the weight values for 4 nodes connecting the red beams were changed.

So that concludes this introduction to JBeam Physics Theory... But, it doesn't have to be goodbye!

If you would like to learn more in depth information, about the topics covered here, or about the many other parts of BeamNG vehicle construction, then go visit the Vehicle Creation Megapage. It contains many more articles, as well detailed documentation on all jbeam related topics.